Originally meant to be a pop-up bar, El Loco might just be here for good. Housed in the Excelsior in Surry Hills, we created this Mexican fit-out in just 7 days!! We ripped out the ceiling to expose the fantastic metal skeleton frame of the existing roof, adding added height & interest. 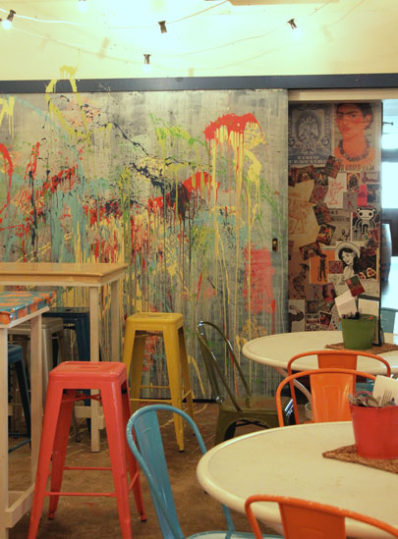 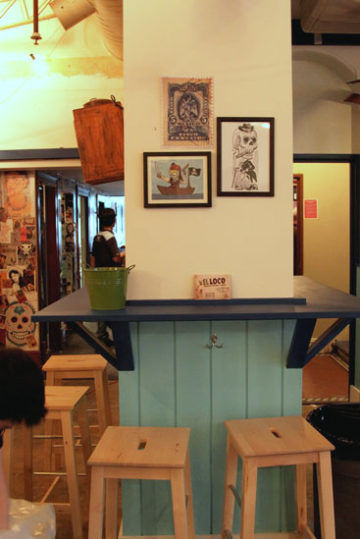 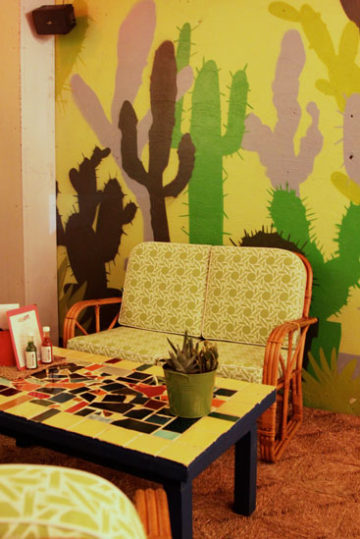 The painting of every surface commenced with a team of three signwriters as well as my trusty painters. I chose a colour palette based on my recent Mexico City trip of bright blues, grass green, yellows, oranges & reds. We made a wallpapering of skulls from stencils a plenty in sunset colours, hand-painted menus & imagery based on Day of the Dead & other Mexican signage & reference. On the higher level at the back we painted a ‘cactus’ room with grass matting and 1950’s cane club chairs shipped down from Queensland. This is where the DJ spins his tunes Thurs, Fri & Sat.

As the Excelsior had previously been a live venue, we maintained the band posters and added to them with printed Mexican posters that are continued throughout & even in the bathrooms (which were also painted & stenciled out!). Then we added checkerboard & skeleton designs, painted cactuses on the walls & plastered on pictures of Frida Kahlo, Mexican skeletons & sharks eating tacos.

We crammed the space full of Mexican oil-cloth in outrageous floral & checked prints that covered custom made high seating surrounded by colourful Tolix metal stools found at both the front bar & restaurant. A rough sawn dado was made to clad the walls & existing kitchen of the room and painted mid-tone sky blue with a darker blue trim and the bar was painted in yellow & red on the horizontal. Elbow bars were added to columns, so food or drinks could be had standing up & all surfaces were an option for customers.

For eating we employed traditional round metal trays, cutlery was picked up at op-shops (so nothing really matches), all condiments & necessities are housed in brightly coloured metal buckets and mostly bio disposable plates & cups are used.

David Bromley canvas-painted lampshades were shipped up from Melbourne and carnaval lights in white created by my handy electricians were casually strung throughout. Additional lighting was converted from old painted gasoline tins that were installed as wall lights.

Outside haybales & converted milk crates with plastic covered cushions are offered as lower seating and we replaced the seating for the existing rectangular tables with benches & covered the tables with Mexican oil-cloth to match inside. The signwriting continues on the exterior & buckets of plants attached to the brick façade and the exterior bi-fold doors were painted in a base ‘Samarkand’ blue.

For greenery, cacti & corn grow from old half barrels and oversized plastic buckets & plenty of metal buckets in bright colours house chilli plants, cactus, succulents and more. The feeling of a festive cantina spills onto the street even down to the rope wrapped sign-post out front.