Located on the first floor of an old-fashioned pub, $120k was allocated for the whole conversion including transitional rooms & a light re-furb of the pool room on the second floor! 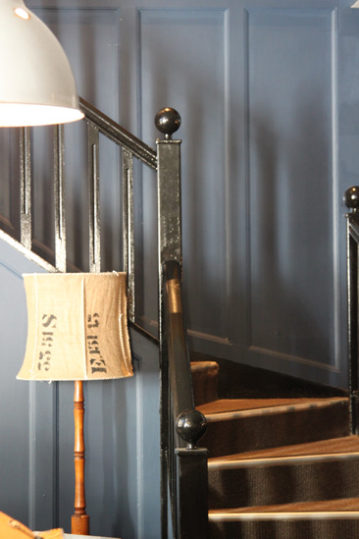 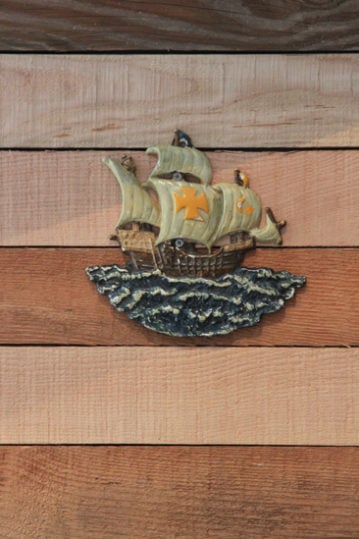 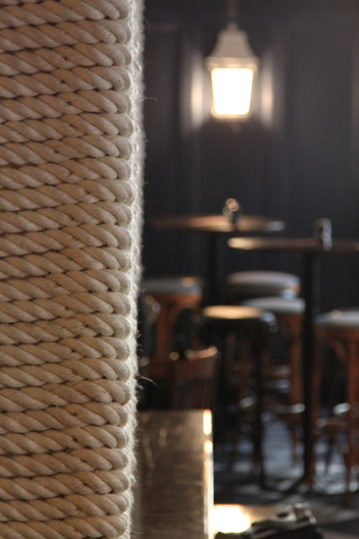 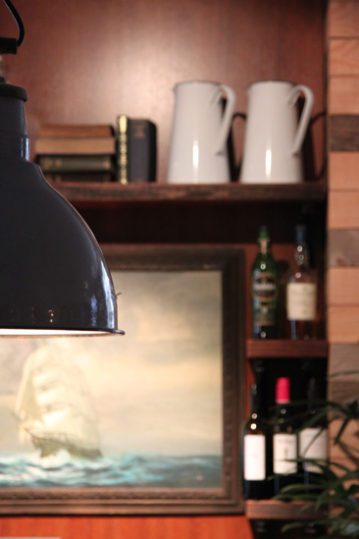 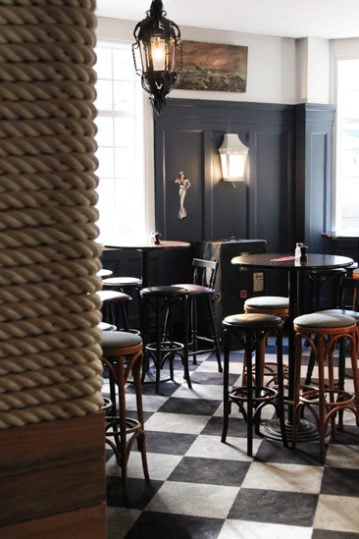 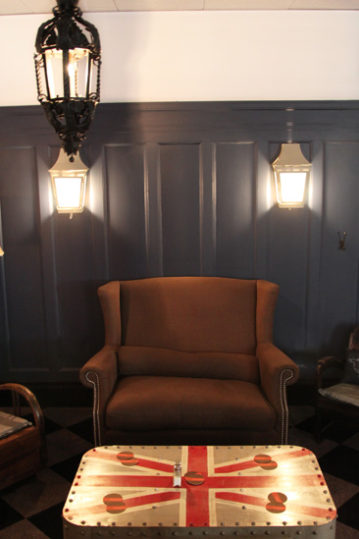 The building is lovely but over the years little has been considered of the interiors & their adjustments. I wanted to start fresh- I only kept the old metal framed windows, existing wood paneled bar & some of the existing oak joinery leading up the stairs including the handrail. These I had French polished & they came up better than expected & sit proudly as key pieces.

I wanted to create a modern-day industrial Sailor’s Haunt. I am hugely influenced by the history of sea travel. Expeditions, adventures & the time of exploration when the French, Dutch & English were in a race to conquer & civilise the world. The flags that flew & tattered through strong winds, relentless storms, high seas and all the wildness of the ocean. The sailors & buccaneers lived on these ships, known as wooden worlds, as voyages of discovery & exploration lasted years, if not a lifetime. As the years went by and these colonisers established themselves across the waters they would moor in different & unfamiliar ports & congregate in cosy & rough bars & pubs where the sailors would drink as much as whiskey & rum on land before they once again returned to their wooden worlds & piratical cragginess.

First, I chose a colour palette of dirty stormy blues, a classic battleship grey and white with a couple of drops of black. I painted the high paneled dado in a dark blue with the walls in white & ceiling in grey. On the staircase I chose a shade lighter blue and left the oak joinery detail in its natural state. My signwriter hand-painted signage & sea sayings on the walls & up the stairs as both a greeting and to give a sense of intrigue for further exploration in the space. I used my new favourite font, Shipley (aptly named) for the logo & all signwriting.

Whilst I was on a trip for NSW Tourism, I stumbled upon five fabulous grey industrial lights, which we wired to line over the bar, small old metal scroll lanterns were painted black to hang within the space and I hand-stitched burlap & an old sail as shades for the old turned wood floor lamps I picked up at auction, and stenciled the longitude & latitude on them.

For furniture, we reused existing bentwood stools and re-covered them in denim, a large communal table was added with bench seating that fits snugly between two columns and converted vintage turned wood leg tables into high seating in the lounge area with wingback sofas covered in tartan, linens & blue commercial grade wools. Old steamer trunks were added as coffee tables. A great find of 50’s style wooden armchairs were incorporated & softened with denim sewn on the selvedge foam padding, and small denim cushions with the world map stitched on them.

For the floor I designed a digital carpet of classic oversized checkerboard in grey & soft black laid on the diamond. On the existing wooden floor we continued the checkerboard & embraced the differing flooring. Simple black carpet was used for the downstairs entrance, stairs and landing. An old wooden rowing boat hangs from the roof, and a table laden with a giant dictionary, lamp & painting of a captain welcome you at the entrance.

The bar is ginormous & high, so I lowered it at the far end to allow for seating and another point of view. I discovered old brackets under the previous elbow bars & incorporated these in my bar design. I wanted the bar display to have the feeling of a library or shelving found in a captain’s quarters, so had rough sawn shelves sit on a wood paneled wall that run to the ceiling. In the middle of the shelving sits the centerpiece that anchors the enormous bar- a perfect painting.

The rough sawn was continued to the food dispensary/dummy waiter and an old side cabinet houses condiments & napkins. For the details, I wrapped columns in rope and added vintage hooks for coats and handbags, props and ship & sea-related paintings were found by scouring auction houses, markets & vintage shops for months. Old-fashioned enamel buckets and jugs I bought are used for plants & water as well as for cutlery. After accessing & creating storage under the stairs we added a peep-show as a tease! For a final bit of fun, I hung pirate ships from the ceiling. You’re guided up the stairs by an oversized tattered Vivienne Westwood Union Jack- be sure to get there before the bell is rung for last drinks.